The novel, The Good Sister, was given to my daughters when the artist who designed the cover heard what good sisters they were to one another. My girls do not have the time at the moment to immerse themselves in a story as they are busy with the work senior high entails so I decided to pick it up as I liked the cover art and the title intrigued me.

The story is told mostly from the viewpoint of Lucy, though we often read about the experiences of the other characters in the story. For reasons that are eventually revealed during the story, Lucy’s sister is no longer at home. Lucy eventually goes out to find her sister, Gabriela, in Mexico City’s most dangerous neighbourhoods. As the story progresses, the part played in Gabi’s fate by her father, brothers, and brother-in-law is revealed.

I was interested to learn the fate of Gabriela, and to see how her sister fared while searching for her sibling. I began the story with eagerness and yet found it difficult to ignore that the sprinkling of Spanish words throughout the text impeded the flow of the story for me. I understand that the author wanted the reader to experience an authentic Mexican environment, but the unknown words did hamper my enjoyment of the novel. I continued reading as I was curious to find out what happened to Gabriella – an event that is hinted at throughout the novel and eventually stated in Gabriella’s voice at the end of the novel.

Since the departure of her sister, Lucy comes to some realisations about herself and the people around her. Early on in the novel, the start of her growth is seen when she picks up the camera for the first time:

“I held the camera to my eye. I adjusted the lens, putting them all in focus, then out of focus again, Seeing Papa in a smear, his features blotted. And Isabel blending into him in a blur of colour. I kept it out of focus like that for a while. When I turned the lens, suddenly everything was clear, precise. The glasses glistening above the bar like a chandelier. The lines in Papa’s face, Paul’s eyes taking on a tinge of sadness, Isabel with a secret in her smile. There was something in all of them I hadn’t seen before.” (p 57-58, Harper Collins Publishers Ltd, 2016)

Lucy is therefore a character that grows and develops during the story – she is more mature at the end of the story than she was at the beginning.

Even though I found this novel slow to get into, and had difficulty with the smattering of Spanish, I did find it a pleasant read once I had read a 100 pages into the story.

I gave the novel 3 out of 5 stars on Goodreads.

Do words and phrases in a language you do not know hamper your enjoyment of a novel? 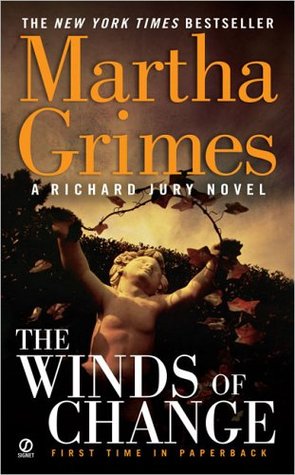 The Winds of Change by Martha Grimes is a novel that was passed onto me. The story sounded interesting – I do enjoy reading murder stories (I am sure you guessed! 🙂 ). This tale describes an investigation by Richard Jury (the name sounds vaguely familiar which means I may have read another of Martha Grimes’ tales of this ilk). The story shows a connection of the dead body of a young girl in London to the cold case of a missing girl in Launceston. The clues of the investigation remain elusive – clues which Richard Jury is able to finally piece together.

I found reading this story slow-going. The back and forth between characters and places is not clearly defined and, in the beginning, was a little confusing. Once I figured out who was who, I was able to make the connections that the authors was describing. I did not find the story enthralling, however, and it took me a while to complete this tale.

Have you read any of Martha Grimes’ tales?

Another paperback which I picked up from my TBR pile was J. A. Jance’s novel titled Cruel Intent. I was still in the mood to read a thriller and this one sounded perfect. The story centres on Ali Reynolds, an ex-television journalist, who is remodelling her new home. When the body of  stay-at-home mom Morgan Forester is found, her husband (Ali’s contractor) is seen to be the prime suspect. Bryan Forester swears to Ali that he is innocent and Ali believes him. Determined to prove Bryan’s innocence, Ali logs onto singleatheart.com, a dating site for ‘married singles’. Unknowingly she puts herself directly in the path of a calculating serial killer.

This thriller is a page turner. I could not put it down and completed the story in two days. Vance keeps you guessing right until the end of the story. There were moments when I was holding my breath, I was so anxious for Ali. I loved this novel and will pick up another written by this author anytime.

Have you read any of J. A. Vance’s novels?

Since I discovered David Baldacci, I have read his stories with enjoyment. This yarn was no different, encouraging me to turn page after page with my eyes riveted by the words.

The title, Hour Game , suggests a game and the story encompasses just that – a game that has been created by a serial killer. The game begins with a murdered woman in the woods, killed in the style of an infamous murderer. The next victim is killed in a different style, thus making it difficult for the investigators to determine the killer’s motives. Among the investigators are two characters that readers have been introduced to in previous novels: Sean King and Michelle Maxwell, two ex-Secret Service agents. I love that we learn more about these characters in this story and am always excited to see a novel with them in it.

I enjoyed this fast-paced thriller. Baldacci kept me guessing as to who was committing murder. Some of my guesses were incorrect as unexpected incidents made me second-guess myself. This novel is definitely well worth the read and I recommend it if you enjoy thrillers that you can finish over a few days.

Have you read any of David Baldacci’s novels?

This year I have decided to join the #50BookPledge led by The Savvy Reader. Not only will I be documenting the books I have read, but I will also have the opportunity to read other readers’ book reviews and participate in competitions. I have participated in book pledges before on Goodreads, and I am interested to see how different this smaller community is to the larger and more well-known one.

I will be tracking my reading in both communities, posting short reviews on my favourite books, as well as posting reviews on my blog. I enjoy reading and know from past documentation that I read more than 50 books a year. This year I pledge to read 75 books – and keep track of them.

If you have pledged to read on either of these communities, look out for me. My profile name is Colline Vinay Kook-Chun. If you follow me, I will be sure to follow you back.

One of the memoirs I read in 2019 that still has a place on my shelf was written by @iamsamrazafar
This month for my #hopefulstack I decided to bring in the reads I didn’t get to in February. I addition, I will be reading some of the titles I was approved for on #netgalley
Over the weekend, it felt like Spring had arrived. Today, Old Man Winter reminded us that he is not yet ready to leave! When I got home after school, I made a hot cup of coffee and grabbed two South African rusks to dunk. A perfect way to warm up!
For this month’s bullet journal spreads, I wanted a splash of colour.
I cannot believe that February is already over! Where is the year going?
My #currentread and a yummy cupcake 🧁