Yesterday, on 12 February 2020, the elementary teachers of Ontario walked out of their classroom for the fifth time this academic school year to protest the changes proposed to public education by the current conservative government. Elementary teachers are protesting the proposed cuts to special education, the increase in class sizes, and the wish to change the current kindergarten model. In addition, teachers want the government to address the issue of the violence in the classroom which is on the increase.

Yesterday, I joined the picket line at the Royal York Hotel where the Minister of Education was to speak to the Canadian Club. When I reached the venue, I was stunned at the number of people already at the site. Teachers had already begun picketing outside the hotel, and the vibe in the area was electrifying. Once all my colleagues had arrived, we joined the demonstration happening in front of the hotel.

As we marched, we chanted and made some noise with our tambourines, shakers and cow bells. There were a number of leaders at different points of the line that lead us in the chants that kept us going. The feeling of solidarity I felt energised me and gave me the zeal to continue for the next three hours.

I was happy to see that we were being noticed. The TV cameras were there: the protest was live streamed and seen in the media – unlike so many other protests that had been ignored. Our local communities had seen us, but not the larger. Yesterday, we were noticed. Yesterday, we made our voices heard.

The police presence was strong – though we did not create any problems. After all, teachers are a group of people who are used to following both the rules and the dictum “safety first”! Ours was a peaceful protest despite there being so many people in one space.

Yesterday was the most electrifying experience that I have had on the picket line. That energy has charged me and will help to keep me going on with the fight. Today, I walk into my classroom and work with the children for whom I am protesting.

20 thoughts on “An Electrifying Experience”

GIVEAWAY ALERT of We Are Watching Eliza Bright by @aeosworth
Love comics and superheroes? This might be the book for you!
My completed crochet project which I have gifted to my daughter. I wish her many snuggles in it while she is studying. 😊🧶😊
"Normally we wouldn't see her. On any other day, we would see only the city and its more standard occupants. Windy City. Every detail of it. The buzz-crackling of electricity in the power lines, the flickering neon signs and lazy lights in shop windows closed for the night, the tooth-splitting bright florescents winking in offices sixteen stories above us."
Today was our fist day back to teaching online and my grade 1 and 2 students quickly fell into the routine we had created in January. It was a bit of a scramble this morning to get ready for class given that we were given 15 minutes warning before the end of the day yesterday, but we all did well.
I received some exciting #bookmail from @simonschusterca today! I love that both are #ownvoices novels that describe the experience of women. I look forward to reading these. 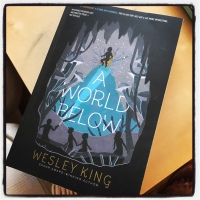