Upon my arrival in Canada, I had to learn the language of the land. Even though my maternal language is English, some of the vocabulary I used was typically South African – or even British. Very quickly I learned that some words I had used my whole life were not understood by the Torontonians. No longer could I use the words mielie (corn), boerewors (sausage) or lekker (nice). I had to remember to use the word sidewalk instead of pavement, sweater instead of jersey, gas instead of petrol.

We had to learn as well the way the Canadian bureaucracy works; and get to know all the rules that the society here follows. Patience was practiced as we went from one person to another, from one place to the next, in order to get things done. Often we discovered things through trial and error, at times we were helped by others.

The biggest thing I have learnt while adapting here is self-reliance. My parents and our siblings were not around to help us so my husband and I had to become self sufficient and learn to rely on one another. I have discovered that I have a strength within me that I never knew existed. And that patience and persistence can bring me things that I believe I should have.

If you have missed any of my Migrating North posts, head on over here.

(This post was written for the FMF 31 day challenge hosted by Kate Motaung. Today’s prompt is: learn)

32 thoughts on “Day 4: Learning to Live in a New Country” 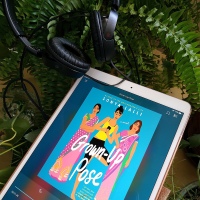