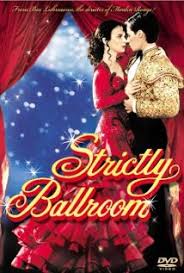 Strictly Ballroom came out in 1992 and was instantly one of my favourite films. Not only did it feature fantastic dance scenes, but it also described my experience of the ballroom dance competitive world exactly as I had experienced it. I laughed at the tongue-in-cheek scenes because the reaction expressed in the film was exactly what I had seen played out at dance rehearsals and at competitions.

This Australian film has been described as a romantic comedy. It is a far cry from the Hollywood romantic comedies, though, because of the setting and the environment in which the romance is played out. The story centres on Scott Hastings (played by Paul Mercurio), an Australian ballroom dancer who wishes to develop his own sense of style in dancing – which leads him to dance steps that are not “strictly ballroom”. After losing a competition, his partner leaves him for another dancer leaving Scott to search for a new dance partner only weeks before the next Pan-Pacific competition. During his search, Scott begins to practice with Fran (played by Tara Morice): a beginner dancer learning at his parents’ studio . And so begins the journey in Scott’s development in dance, and in romance.

The trailer is a perfect synopsis for the story of this film:

In his journey towards his individual identity as a ballroom dancer, Scott needs to learn that dance it not merely a series of steps; but that good dancing comes from the heart. He first learns this when he visits Fran’s family and sees how the Paso Doble is danced with authenticity:

The final dance scene of the film takes place at the Pan-Pacific Grand Prix. In this dance, Scott is dancing from the heart with an authenticity he had not previously shown:

Strictly Ballroom is also a romance. We are shown the blossoming of love between Scott and Fran in this tender dance scene:

One would not expect a film about ballroom dancing to do well. This film, directed and co-written by Baz Luhrmann, was however a huge success in Australia (grossing at AU$21 million)  and did well in the United States too (grossing at US$11 million). The film was accepted for the Cannes Film Festival; and was nominated for many awards. The awards received were:

Years later I still enjoy watching this film. I think the time has come for me to pull it out again and enjoy not only the numerous dance scenes, but also the romance and comedy.

Did you see Strictly Ballroom? What were your thoughts?

(Join Jake every week for a theme for creative inspiration. This week’s prompt is Famous Movies.)